This talk is being given by Jenifer McIntyre from Washington State University.  NOAA Fisheries and USFW have collaborated on this project.

Coho salmon are like a stormwater sentinal- they spend the first part of their lives in freshwater.  Also, there are very high rates of pre-spawner mortality in urban areas.  For example you can find dead adult females full of eggs.  They died before they spawned.

In a past  study they raised fish from eggs in untreated stormwater, versus treated (filtered) stormwater.  Eggs in the unfiltered water: High rates of death, low growth rates, cranial haemorrhaging.

In this study: Some invertebrates and zebrafish.

Six storm events.  Exposure to stormwater runoff from a highway.  Affects on zebrafish: death, small size, delay in hatching, swim bladder not inflating, small heart, deformed heart and jaw.  Or a developing fish will not escape from the chorion.  This was wh- en they brought water into the lab.

Now they are looking at treated stormwater.  Exposing juvenile coho, mayfly nymphs, and mayflies.  Treating the stormwater prevented and also completely eliminated symptoms that would have normally been seen with straight stormwater.

In conclusion, soil bioretention, in other words treating stormwater runoff, can greatly reduce the damage caused to aquatic life from stormwater.

In areas where urbanization is occurring, we need to make sure development occurs in a way that stormwater can be treated.

Audience Question: What do you do with the bioretention material (sand and compost) after it has been used to filter stormwater?  McIntyre says: It will take many years to use up the capacity of these bioretention features.  They are studying the design life of these features.

Road runoff can affect saltwater species in the same way.  They have done studies in California on this.

This talk was very triking and disturbing, thought the potential to treat the stormwater looks promising.

Mussels are natural environmental samplers or indicators. Mussels are ideal to sample Polycyclic aromatic hydrocarbons PAHs from they unlike other shellfish mussels have no liver function and can contain chemicals for up to two months. PAHs are molecules found in oil and coal or fossil fuels. Department of fish and wildlife worked with the National Mussel Watch to compare data gathered from the Puget sound and other water sheds.

DFW did a pilot study ranging the Straight of Georgia to the South Puget Sound. Using mussels to evaluate near shore contamination.  Transplanted mussels were used instead of natural mussels to increase repeatability and decrease variability. PAH is one contaminate that is of concern.

PAH fingerprinting can be used to evaluate near shore contamination.

Eutrophication is a problem throughout Puget Sound and specifically in  Budd Inlet it has led to problems including low DO.  Bioextraction is a method of removing nitrogen through harvesting shellfish and seaweed.  Mussel harvesting is a method of “recycling” these excess nutrients.  PSI has been investigating this method for use in Puget Sound.  In 2011 a pilot project in Quartermaster harbor was found to have success.  A project in Budd inlet was subsequently launched in 2013.  Monthly data was collected at three  sites.  By mid July 2013 a good mussel set was found on the sampling straps.  TESC was involved in composting the mussels that had grown on the setting straps.  4500 pounds were composted by TESC.  New composting collaborations with WDOC-Cedar Creek composting has begun.  Compost testing resulted in high calcium content, and grew vegetables successfully.  Results indicate that 8000 lbs. of mussels = A removal of 80 Lbs. of nitrogen, or 0.66  lbs. per day.  In order to remove 100 lbs. of nitrogen per day, 16,810 straps would need to be installed (compared to the pilot study of 120 straps).  This would equal the size of 2 West Bay Marinas.  In addition to the quantitative data and feasibility of this mediation process, this project served as a great way to educate the public through youth community involvement about nutrient systems and what they can do on a daily basis to help improve water quality.

At depth, oxygen levels follow seasonal patterns, and they are lowest at this time of year.  Shallow inlet oxygen patterns are much more complex.  Water stagnates during neap tides, and dissolved oxygen can be lower then.

Our population will increase significantly in the future.  South Puget sound is at the end of along conveyor belt of circulation in South Sound.  It is very sensitive to increases in human pressures.

Every inlet of Puget Sound has a unique pattern of circulation and oxygen pattern, a unique response to changing conditions.

This is a long term modeling effort.  Mindy and her colleagues are looking right now at how to reduce nutrient inputs that affect dissolved oxygen.

The teams goal was to create social marketing behavior change strategy that will lead to residential landowners changing their shoreline armoring-related behaviors.

Social marketing is intended to increase motivators and decrease barriers. Some barriers with leaving shoreline unarmored include land owners property not protected from erosion or property not being protected after removal or existing armoring. Some motivators include providing healthy habitat for fish and wild life as well as getting a tax break and reducing fees to land owners.

They also looked at parcel size, land value,  and age or owners. Heather found that if the parcel size is larger it is also less likely to be armoured.

Paraphrasing what Catherine is saying:

We know we live in an mazing place, but the fish that we depend on are degraded and are polluted.

Fish consumption rate is a portion of a larger health based equation that is meant to reduce the risk of ill health.

The current FCR is based on an estimate that was done 40 years ago at the request of the tuna industry. Because of pollution, fish consumption was probably pretty low. This is also a time when tribal fishing was still coming back online, the Boldt decision just having been handed down.

Water will only be clean enough to allow up to one meal a month.

The tribe conducted one of the first fish consumption surveys with their members, working with the Tulalip Tribes and the EPA.

The 6.5 rate was built taking into consideration of what people eat in Nebraska. Even coastal people eat more than that. And, tribal members eat even more. Tribal survey was in 1994, 20 years after the original survey.

When you talk about percentiles of protection in Indian Country (90th, 95th) tribal leaders know who the 10 percent and 5 percent who are being left out. It isn’t just a number. So, even rates like 175 are compromise numbers for the tribe, because they leave so many people out.

Squaxin dietary surveys found that children under six consumed fish over 3 times the rate of their parents.

Tribes started proving their populations were at risk 20 years ago, but we’re still not where we need to be. The FCR has not gone up.

EPA was moved by the tribal studies, updated guidance in 2000:

Default rates are only used as a last resource. Local data is preferred. And, Washington of course has local data.

Also, keep in mind that contemporary numbers are lower than historic rates because of pollution and degradation of natural resources.

So, where is Washington? Fifteen years ago, the state recognized they needed to update the FCR, but a report was never finalized.

State started the process, but in July 2012, the state pivoted in their process: http://www.invw.org/article/how-boeing-allies-torpedo-1353

And, lastly, this past summer, the state announced an increase in the FCR to 175, but increased the risk of cancer rate by 10 fold. The state also announced that for the pollutants that would go up, that they wouldn’t backslide.

We’ll be using this blog tomorrow to cover the South Sound Science Symposium.

Throughout the day, there will be regular updates from the symposium being held at the Squaxin Island Tribe’s Little Creek Events Center. All of the posts will be under this category. You can also follow the social media hashtag (on Facebook or Twitter) #S42014 for even more discussion.

You can find the list of speakers at the symposium here.

Powerpoint presentations from the speakers at the South Sound Science Symposium are now available online. Recorded audio will be added soon. 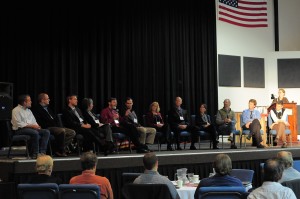 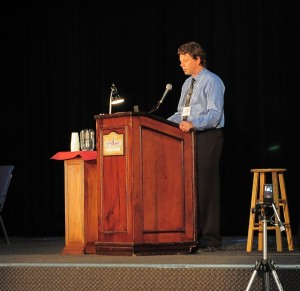