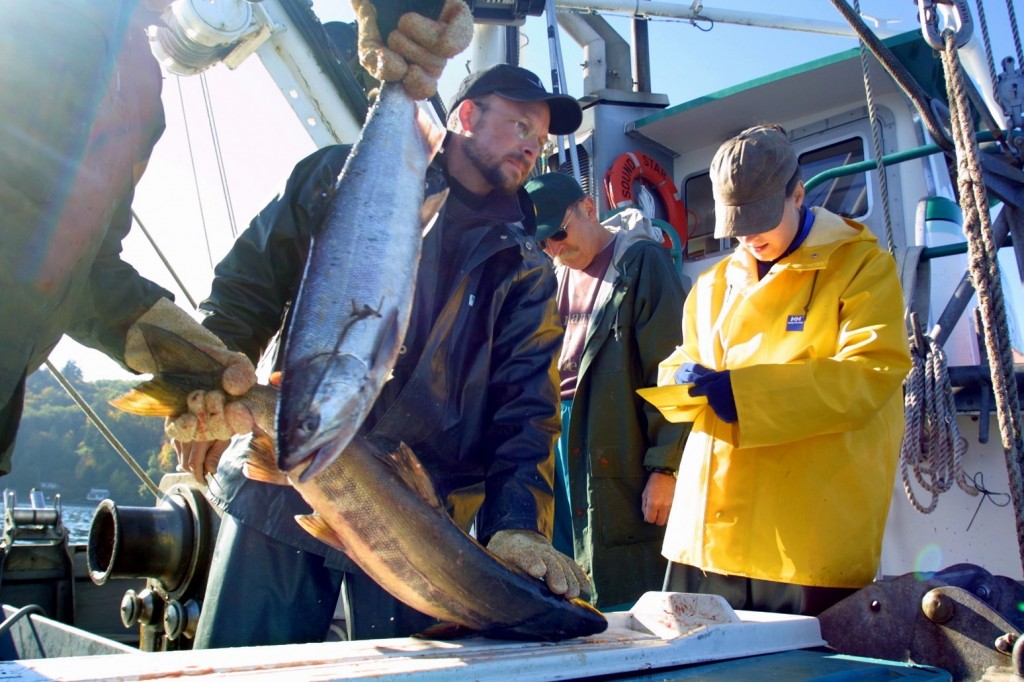 Just a quick summary on the WK43 test fishery info:

South Sound chum test fishing at Apple Cove Point improved this week. Yesterdays test fishery caught a total of 3,456 chum in five sets (plus 51 coho and 15 immature Chinook). Heavy fog all day prevented them from completing the usual six sets. Tides were also not ideal, although it was ebbing during all of the sets, which is good. The sex ratio of our sample was apparently 56%, though there may be reason to question whether that estimate is accurate or perhaps overestimates females. Age distribution: 70.7% age 4, 20.2% age 3, 8.10% age 5, and 1% age 6. The average weight of the chum was estimated at just under 9 pounds.

State catch models supported an increase of the runsize as high as 750K. Test fishery models supported an increase to the chum runsize to 640K.   After discussion of regional catches and runsize models the Tribes and State agreed to increase the chum runsize to 500K from 350K.      Week 44 Apple Cove Test fishery will go as scheduled next Wednesday October 30th.   WDFW will continue to fish as scheduled.

We did get Kennedy stream count estimate from WDFW and they counted 672  live- 7 Dead chum from the falls down to the mouth.  They also saw 20 live coho and 1 dead coho.  This is on track for Kennedy creek fall chum run-timing, especially for the low water and stream flow.

If you have any questions please contact Joe Peters, Fish Biologist/Harvest Manager at jcpeters@squaxin.us or 360-432-3813

During the chum salmon season Northwest Indian Fisheries Commission (NWIFC) conducts the Apple Tree Cove Chum test fishery in Area 10 (Near Kingston, Washington), weekly for four weeks. This test fishery has been on going for over 30 years. In this test fishery the catches are used to update the inseason Puget Sound Fall Chum runsize. Catch results are plugged into a model with historical test fishery data to determine a runsize. After each of these test fisheries, harvest managers from Washington Fish and Wildlife (WDFW) and Puget Sound Tribes conference call on the results as well as share regional catches.  Based on this data the Tribal/WDFW harvest managers make a decision to increase or decrease the Puget Sound Chum runsize.

The second day of test fishing for chum at Apple Cove Point Wednesday October 16th, ended with results much the same as last week (464 chum). They caught a total of 494 chum in six sets, along with by-catch of 47 coho and 6 immature Chinook. The tides were somewhat more favorable than the previous week, flooding during the middle of the day. Based on the sample (n=220), they estimate the catch was 46% female, which falls within the range of typical sex ratios for week 42. Week 42 samples also comprised of 83% of age 4 year old chum.

NWIFC regional biologist put together several regression models, of which are not particularly strong to update the runsize. The strongest model suggests increasing the runsize to 400K, the Tribes and WDFW felt that the models supported keeping the preseason forecast of  349K as the chum runsize.   Week 43 test fishery will be conducted Wednesday October 23rd.   Data from week 43 test fishery and this weeks catches from WDFW and Puget Sound Tribes will be useful tools to determine if the chum runsize will increase or decrease .

Current catches to date for Squaxin is just under 1,000 chum.   Kennedy Creek is starting to get chum, with last weeks adult spawner survey counting 189 live chum and 0 dead from the falls to the mouth. 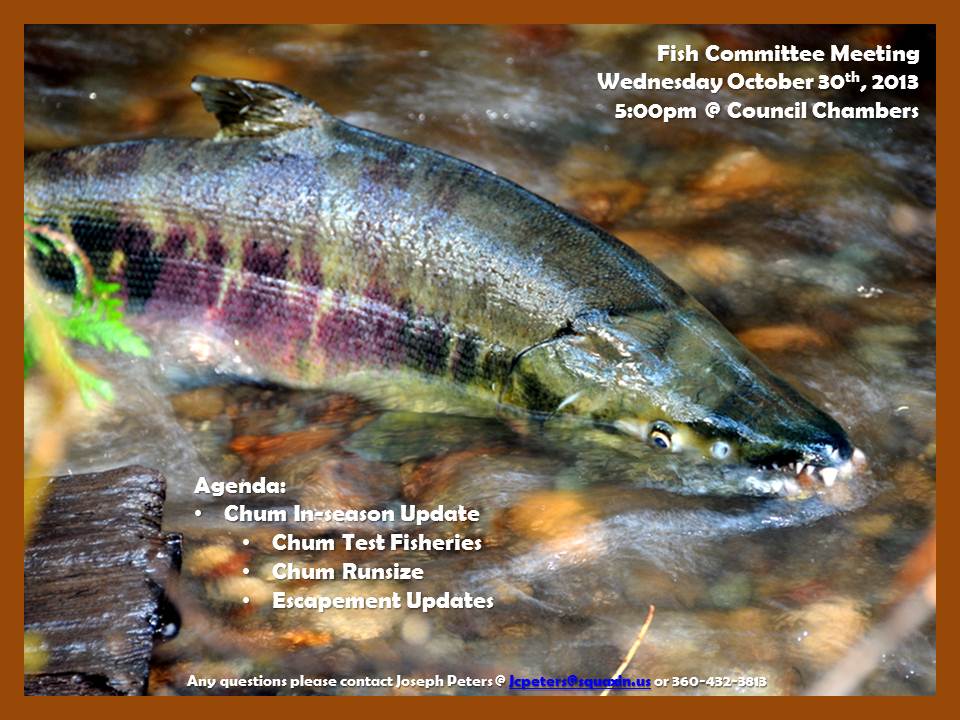