Budd Inlet has a dissolved oxygen problem. In short, there isn’t enough oxygen in the water near Olympia to support healthy marine life.

And, the primary reason for this dramatic drop in oxygen is Capitol Lake.

Recent findings released by the state Department of Ecology point out that even if all of the other problems that cause low oxygen went away (other than the lake), most of the problems in Budd Inlet would still exist.

Low dissolved oxygen is important because fish and other marine life need enough oxygen to live. Capitol Lake is shallow, stagnant and fills each summer with algae, so the water flowing out of it is extremely low in dissolved oxygen.

Some people have argued that the real problems we face in deep South Sound have don’t have anything to do with Capitol Lake. But, as the results from Ecology show, even if we moved the LOTT treatment outfall to Priest Point or Boston Harbor, implemented advanced treatment at waste water treatment plants and reduced all other influences on dissolved oxygen, Capitol Lake is still the biggest problem.

This is current conditions, with the lake in place and a host of other issues: 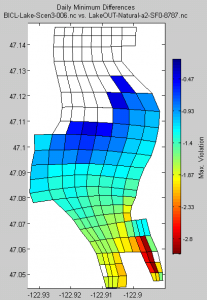 This is the map if everything else was cleaned up and just the lake remains:

And, this is the map if the lake was removed and the rest of the problems were taken care of: 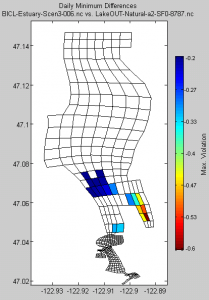 Clearly what happens when you try to clean up the rest of the issues and just leave the dam is that the dissolved oxygen problem remains. You’ll still have some issues if you do nothing else and take the dam out, but Capitol Lake is clearly the leading cause of low dissolved oxygen in Budd Inlet.