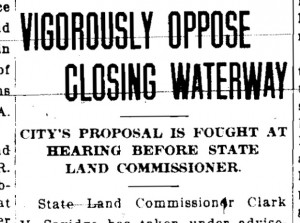 The creation of what we now know as Capitol Lake was not the natural outgrowth of a landscaping plan for the Capitol Campus. Rather, it was the result of a decades-long lobbying effort by local businessmen, politicians and city-fathers to create an appealing water feature and “scrape the moss off” Olympia.

Recently, lake defenders have distorted the origin story of Capitol Lake for use as a cloak of legacy. The defenders of the lake present the argument that the Wilder and White plan for the campus was the origin of the lake idea. This position is wrong. They claim that restoring the estuary would disparage our own history. The true origins of Capitol Lake inform not only our misunderstanding of local history, but also how we move forward with the future of the lake and the Deschutes River estuary.

The initial campus plan called for a modest reflecting pool, but it was a group of prominent Olympia citizens that suggested creating a much larger lake by impounding the Deschutes River with a dam running east-to-west. This more drastic proposal was not embraced by the State Capitol Commission and was immediately rejected.

The first suggestion of a dam at the mouth of the Deschutes actually pre-dates Wilder and White by more than a decade. Ironically, Leopold Schmidt, the founder of the Olympia Brewing Company, proposed damming the river with a set of locks in 1895 to facilitate shipping to the planned brewery (The Daily Olympian, 1895). Later opposition by Tumwater and the Olympia Brewing Company would prove to be one of the largest impediments to the damming of the river for decades to follow.

During the early days of drafting a capitol campus plan, Wilder and White worked with the large and renowned Olmsted Brother firm to develop a larger landscape plan for the campus. Based on Wilder and White’s rough drawings that included some sort of reflecting pool, the Olmsted firm added more detail to the plans.

There are numerous representations by Wilder and White about what shape the campus could eventually take. This image below in particular has been used by current lake defenders as the best representation of what their vision for the lake was.

This is actually a draft that was meant to show the arrangement of the buildings in the capitol group, not to show details of a proposed water feature. While you could read into the picture a proposal similar to the current lake, it included no actual detail of how that would be accomplished. It simply presented the idea of a pond.

When the planners started putting details down on paper, John Olmsted wrote about a reflecting pool that changed with the tides. From a Jan. 19, 1912 letter to the State Capitol Commission:

…extend a dike with a driveway upon it along the east side of the channel from Capitol Park to 6th Street (Legion Way) and to acquire all the flats between the river and the proposed Capitol Avenue, this area to be mainly devoted to a salt water pond which would be kept nearly up to high water level, merely fluctuating a foot or two at every tide so as to ensure a change of water.

Here is the more detailed plan for the Wilder/White and Olmsted saltwater pond laid over a more current aerial photo of Capitol Lake: 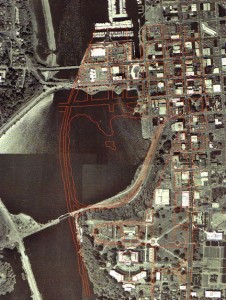 This reflecting pool would have had a much smaller footprint than the current version. Olmsted, along with architects Walter Wilder and Harry White never intended to block the Deschutes River or block the incoming tide to create a reflecting pool.

Actually, the entire idea behind the originally proposed reflecting pool was to take advantage of the tides. The pool itself would be filled by salt water and refreshed by the tides. A sill would keep the pond filled and ensure mudflats weren’t exposed, but the tide would not be totally blocked.

As late as 1927, when construction of the domed legislative building was in full swing, the designers of the campus continued to pursue the modest saltwater tidal pond rather than an aggressively dammed estuary (Epstein, 67).

Today’s Capitol Lake strongly resembles a plan drawn up by former Olympia mayor and state legislator P.H. Carlyon. His 1916 plan would have included a dam at 4th Avenue (just north of the current dam), replacing the wooden bridge that at the time spanned the mouth of the Deschutes River.

While the Carlyon lake plan was likely popular locally, it lacked any further support:

City’s proposal is fought at hearing before state commissioner.

…State Lands Commissioner Clark V. Salvidge has taken under advisement the petition presented by the city of Olympia and by Senator P.H. Carlyon in a hearing before him last Tuesday, for the vacation of the Des Chutes waterway, the construction of a dam in the river at Fourth street and the creation of a lake south of that street…

The city officials and Dr. Carlyon are practically alone in their advocacy of the change…

Carlyon’s lake was impossible at the time for two reasons:

Carlyon’s lake proposal was not his first effort in municipal terraforming. During his time as mayor of Olympia, he made significant efforts to complete the Carlyon fill, which created dozens of city blocks on the east side of downtown. This fill coincidentally also obliterated acres of the Moxlie and Indian creek estuaries (Newell, 242).

Carlyon’s interest in the construction of the eventual permanent capitol campus (and lake) was primarily to put Olympia in its proper place among northwest cities.

This episode took place soon after the initial approval of the Wilder and White plan in 1911 (Newell 246):

Olympians were delighted when the plan for a complete capitol group was complete… (but) Everett boosters had been engaged in a last minute plot to steal the capital for their city and a bill had been introduced to move the supreme court and library to Seattle.

…Representative H.E. Foster of King county led the opposition with the traditional charge that Olympia was a sleepy village inhabited by mossbacks. “What has Olympia ever done for the state?” he wanted to know. “Although it’s been the seat of government for 50 years it has been at a standstill, progressing very little. Olympia is asleep and does not deserve any consideration from us.”

Dr. Carlyon, representative from Thurston County, having just put together the great downtown dredge and fill project, was speechless with indignation. William Ray, also of King County, added his voice to the defenders of the capital city, explaining that “the reason Olympia hasn’t been going ahead with other cities in the Northwest is simply this: every legislative session, some cranks come down here with some idea of moving the capital and agitate the question during the session. No business man or eastern capital is going to invest here until the question is settled once and for all…”

Even though it was rejected soundly in 1916, the Carlyon’s Deschutes Waterway project did not go away.

In 1937 the state Legislature allowed the use of bond revenue from state trust land to start buying property along the Deschutes waterway, the first step in the process to complete the aggressive lake plan. A 1941 ad for a mayoral candidate listed “develop the Deschutes Waterway” as a campaign goal (Olympia News-Graphic, 1940).

In early 1941, with the land in the waterway being bought up by the state (Olympia News, March 1941), a delegation of state capitol campus commissioners and “prominent Olympians” visited a Tumwater town meeting to persuade their neighbors to drop their objections to the larger lake plan. And, by a 29-3 vote, the Tumwater residents agreed. (Olympia News, June 1941). Among the reasons for Tumwater’s acquiescence was a new overland rail line that made shipping by water unnecessary.

The final 1947 debate on whether to fund closing the Deschutes waterway was certainly a debate between Thurston County and the rest of the state. The proposal to issue $1 million in bonds for the project actually received a negative vote in a House committee due to its proposed funding mechanism.

Rep. Ella Wintler (R-Vancouver), chair of the committee that gave the negative vote, was quoted as opposing the bill because it took the state’s priority away from constructing buildings. She added that the only reason it advanced to the House floor after receiving a poor committee report was because of consideration for Olympia’s Rep. George Yantis (Daily Olympian, February 1947).

It is high time the Legislature settled down and realized we are in big business. Miss Wintler’s thoughts are so sound they are irrefutable. There are serious responsibilities we have begun to overlook the business for which we are here – conducting the business of the state.

After passing the House, it was only because of an extraordinary effort by another Olympia state senator, that the bill got any consideration in the Senate. State Sen. Carl Mohler (Thurston County) worked out a deal with a Senate committee chair to give the committee extra time to consider the bill. Mohler’s arguments put a strong emphasis on the project’s funding; the funds would come from a trust, not directly from the pockets of taxpayers. (Daily Olympian, March 1947).

The lake bill passed by a 70-20 vote in the House and a 29-4 vote in the Senate, but only because state Legislators from Olympia pushed hard for it. The lake bill was not considered a high priority otherwise.

Campaigning for the basin was a discouraging task at times but city officials, the chamber of commerce, various civic and fraternal organizations, real estate groups and numerous individuals kept plugging away until their perseverance was rewarded last week by the assurance that a long-fondled hope at least will be translated into reality.

News that the much-needed improvement will be started as soon as is feasible was received with immense satisfaction by the residents of Olympia and suburban areas… (Capitol Lake) will be a source of much pleasure to the people who already are established here, but also will convince visitors that Olympia is a mighty pleasant place in which to live and work.

The advocacy, funding and creation of Capitol Lake goes well beyond the intention of the capitol campus designers. Their intention was for a modest reflecting pool as part of the landscape of campus in balance with the built environment of the campus and the surrounding landscape. It was not unreasonable for the designers of the campus to consider a reflecting pool, but what ended up being built was an obese exaggeration.

When you view the Wilder, White and Olmsted tidal pond in the true historic context, it is only one mention in decades of discussion, certainly not the original vision.

Epstein, Mark B. “A history of the Washington state capitol landscape.” 1992.