The name “Salish Sea” was chosen as the “Name of the Year” by the American Name Society.  Last year’s winner was “Barack Hussein Obama.”  Check out www.kitsapsun.com/news/2010/jan/12/salish-sea-becomes-name-of-the-year for more details. 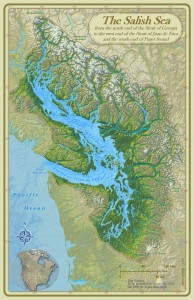 A news release this afternoon:

The Squaxin Island Tribe has filed a second petition with the state Department of Ecology (DOE) to stop all new water withdrawals, including permit-exempt wells, in the Johns Creek watershed near Shelton. The action was taken to protect several runs of salmon that spawn and rear in the creek.

“There isn’t enough water in Johns Creek to support salmon,” said Andy Whitener, natural resources director for the Squaxin Island Tribe. Likely because of withdrawals from hundreds of domestic and municipal wells, the creek does not meet state mandated minimum flows to protect salmon.

The tribe filed the petition under a state law that closes a watershed from future withdrawals if not enough information is available to justify those withdrawals.

This new petition comes almost two years after the state declined an initial call from the tribe to protect Johns Creek. With the original refusal came the promise that the state would work with Mason County to develop ways to achieve minimum streamflows. “That so-called ‘alternative path forward’ never materialized,” Whitener said. “Neither the state or Mason County took any action.”